The technology doesn’t quite allow you to ‘see through’ walls, but it’s about as close as you can get to x-ray vision.

But once the novelty of the idea has worn off, you might be left wondering: what else can I actually do with a thermal camera?

Here are some of the applications we have come across so far.

1. Surveillance. Thermal scanners are often used by police helicopters to see hiding burglars or track someone fleeing a crime scene. 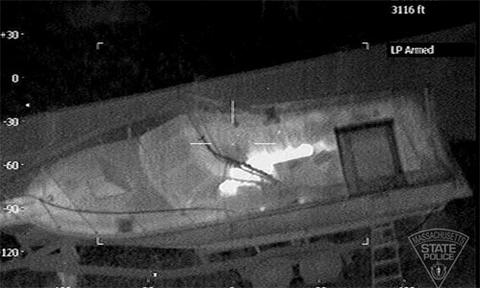 Infrared camera vision from a Massachusetts State Police helicopter helped to find traces of the Boston Marathon bombing suspect’s heat signature as he lay in a tarp-covered boat.

2. Firefighting. Thermal cameras allow you to quickly identify if a spot fire or stump is actually out, or just about to reignite. We have sold numerous thermal cameras to the NSW Rural Fire Service (RFS), Victoria’s Country Fire Authority (CFA) and others for conducting ‘mop up’ work after back burning or wildfires.

3. Search & Rescue. Thermal imagers have the benefit of being able to see through smoke. As such, they are often used to find out where people are in darkened or smoke-filled rooms.

4. Maritime Navigation. Infrared cameras can clearly see other vessels or people in the water at night-time. This is because, in contrast to the water, boat engines or a body will give off a lot of heat. 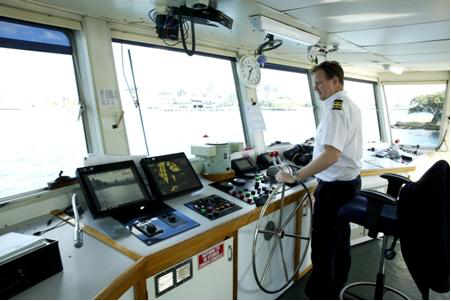 A thermal camera display screen on a Sydney ferry.

5. Road Safety. Infrared cameras can see people or animals beyond the reach of vehicle headlights or streetlights. What makes them so handy is that thermal cameras do not require any visible light to operate. This is an important distinction between thermal imaging and night vision (which is not the same thing). 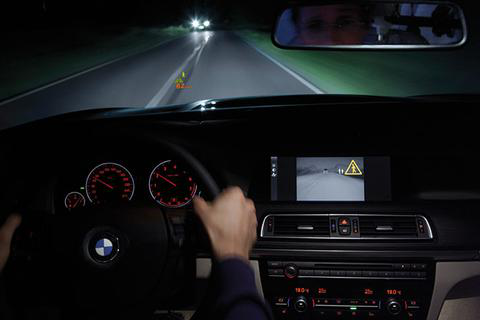 BMW 7 Series incorporates an infrared camera to see people or animals beyond the driver’s direct line of sight.

6. Drug Busts. Thermal scanners can easily spot households or buildings with a suspiciously high temperature. A house with an unusual heat signature may indicate the presence of grow-lights being used for illegal purposes.

7. Air Quality. Another customer of ours is using thermal cameras to detect which household chimneys are in operation (and therefore using wood for heating). The same principle can be applied to industrial smoke-stacks.

8. Gas Leak Detection. Specially calibrated thermal cameras can be used to detect the presence of certain gases at industrial sites or around pipelines.

9. Preventative Maintenance. Thermal imagers are used for all kinds of safety checks to reduce the risk of fire or premature product failure. See the electrical and mechanical sections below for more specific examples.

10. Disease Control. Thermal scanners can quickly check all incoming passengers at airports and other locations for elevated temperature. Thermal cameras can be used to detect fevers during global outbreaks such as SARS, Bird Flu and COVID-19. 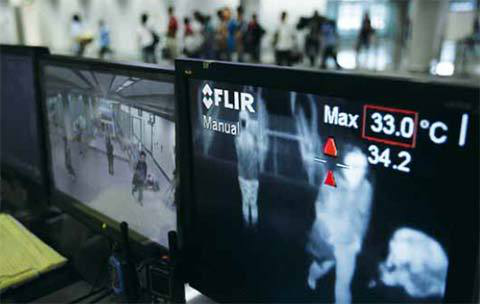 11. Military & Defense Applications. Thermal imaging is of course also used in a wide range of military hardware, including aerial drones. Although now just one use of thermal imaging, military applications are what originally drove much of the initial research and development into this technology.

12. Counter-Surveillance. Covert surveillance equipment such as listening devices or hidden cameras all consume some energy. These devices give off a tiny amount of waste heat that is clearly visible on a thermal camera (even if hidden inside or behind an object). 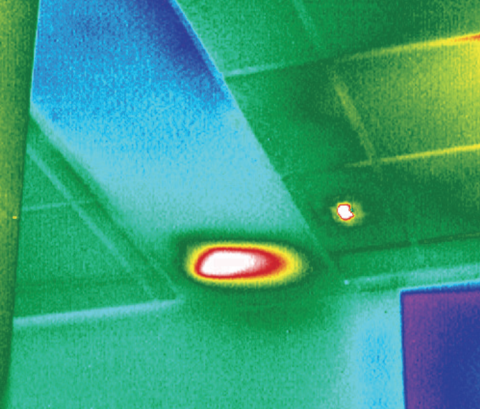 Thermal image of a listening device (or another energy-consuming device) hidden in roof space.

13. Unwanted Pests. Thermal imaging cameras can find out exactly where possums, rats or other animals are camping out in a roof space. Often without the operator even having to crawl through the roof.

14. Animal Rescue. Thermal cameras can also find stranded wildlife (such as birds or pets) in hard-to-access areas. I’ve even used a thermal camera to find exactly where birds were nesting above my bathroom.

15. Termite Detection. Infrared cameras can detect areas of potential termite activity in buildings. As such, they are often used as a detection tool by termite and building inspectors.

The potential presence of termites detected with thermal imaging.

16. Wildlife Surveys. Thermal cameras are used by ecologists to conduct wildlife surveys and other animal research. It’s often easier, quicker, and kinder than other methods such as trapping.

19. Musculoskeletal Problems. Thermal imaging cameras can be used to diagnose a variety of disorders associated with the neck, back and limbs. 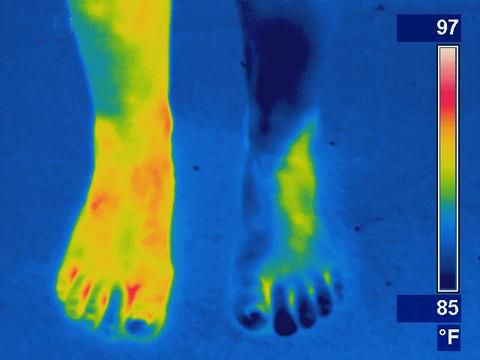 21. Cancer Detection. Whilst infrared cameras have been shown to clearly indicate the presence of breast and other cancers this is not recommended as an early-stage diagnostic tool.

23. Horse Treatment. Thermal cameras can be used for diagnosis of tendon, hoof and saddle problems. We’ve even sold a thermal imaging camera to an animal rights group which was planning to use the technology to demonstrate the cruelty of whips used in horse racing. 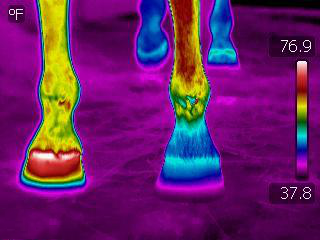 As they can’t tell you “where it hurts” thermal cameras are a particularly useful diagnostic tool in animals.

25. Power Usage. Thermal scanners clearly show which circuits on a switchboard are consuming the most power. 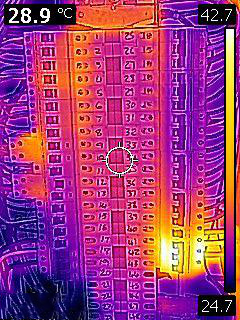 During an energy audit, I was able to quickly identify the problem circuits with a thermal camera. As you can see, positions 41 to 43 have an elevated temperature indicative of high current draw.

26. Hot or Loose Electrical Connectors. Thermal cameras can help find defective connections or ‘hot joints’ before they cause irreversible damage to equipment or stock.

28. Underfloor Heating. Thermal scanners can show if electric underfloor heating is working properly and/or where a defect has occurred.

29. Overheated Components. Overheated substations, transformers and other electrical components all show up very obviously in the infrared spectrum. Higher-end thermal cameras with adjustable lenses are often used by electricity utilities and others to quickly check overhead power lines and transformers for issues. 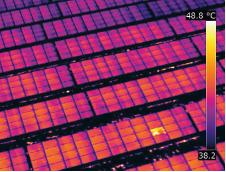 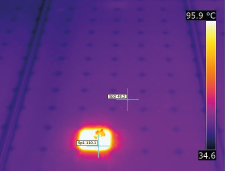 32. HVAC Performance. Thermal scanners show how much heat is being generated by equipment inside a building. They can also show how the air conditioning ducting could be improved to deal with this, for example, in server rooms and around comms racks.

33. Pumps & Motors. Thermal cameras can detect an overheated motor before they burn-out. 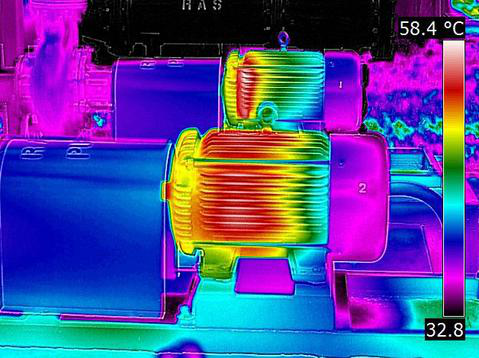 High clarity thermal images have higher resolution. Generally speaking, the more you pay, the better the image quality you get.

34. Bearings. Bearings and conveyor belts in factories can be monitored with a thermal camera to identify potential issues.

35. Welding. Welding requires the metal to be heated uniformly to melting temperature. By looking at the thermal image of a weld, it is possible to see how the temperature varies across and along the weld.

43. Leak Detection. The source of a water leak is not always obvious, and it can be expensive and/or destructive to find out. For this reason, many plumbers have purchased our FLIR thermal cameras to make their job a whole lot easier.

Thermal image showing a water leak (likely from neighbor above) in an apartment kitchen.

44. Moisture, Mold & Rising Damp. Infrared cameras can be used to find the extent and source of damage caused to a property by moisture-related issues (including rising and lateral damp, and mould).

45. Restoration & Rectification. IR cameras can also determine if restoration works have effectively solved the initial moisture problem. We have sold many thermal cameras to building inspectors, carpet cleaning, and mould-busting companies for exactly this purpose.

46. Insurance Claims. Thermal camera inspections are often used as an evidence base for insurance claims. This includes the various mechanical, electrical and safety issues outlined above.

47. Tank Levels. Thermal imaging is used by petrochemical companies and others to determine the level of liquid in large storage tanks.

48. Insulation Defects. Thermal scanners can review the effectiveness of, and find gaps in, ceiling and wall insulation.

49. Air Leakage. Thermal imaging is used to check for air leaks. This can be in air conditioning or heater ducting as well as around window and door frames and other building elements.

50. Hot Water. Infrared images show how much energy hot water pipes and tanks are losing to their surroundings.

51. Refrigeration. An infrared camera can find defects in refrigeration and cool room insulation.

An image I took during an energy audit, showing defective insulation in a freezer room.

54. Heat Loss. Thermal imaging cameras allow you to see which areas of a particular room or building are losing the most heat.

55. Heat Transfer. Review the effectiveness of heat transfer, such as in solar hot water systems.

56. Waste Heat. Waste heat equals wasted energy. Thermal cameras can help find out which appliances are generating the most heat and therefore wasting the most energy.

With the advent of ever lower-cost thermal cameras - you no longer need to use them exclusively for the professional purposes outlined above.

57. Show-off. And impress your geeky friends.

58. Create. Use an infrared camera to create unique artworks. 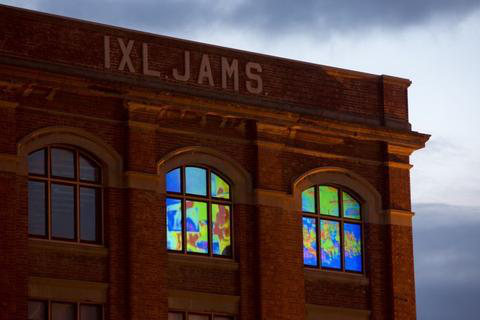 60. Search. Search or Bigfoot, The Yeti, Lithgow Panther or some other as yet unproven monster.

61. Camping. Check out the night-life when camping.

64. Barbecuing. Optimize the performance of your portable charcoal BBQ in an unnecessarily high-tech fashion.

65. Pets. Take predator style images of pets, or find out exactly where they have been sleeping around the home.